skip to main | skip to sidebar

TAPESTRY IS THE BIG PICTURE

Email ThisBlogThis!Share to TwitterShare to FacebookShare to Pinterest
Labels: Tapestry

Subscribe to Le Petit Salon by Email
A lively (read heated) exchange of commentary at the SALON regarding Sophie Calle's exhibition "TAKE CARE OF YOURSELF" at the Paula Cooper Gallery in Chelsea is duly noted in our hearts and minds and warranted a mention in ARTS RAVEL. Here is the link to the blog article that is written by one of our Salonistas' elegantly furthering that discussion: http://artsravel.blogspot.com/2009/05/sophie-calles-take-care-of-yourself-id.html I enjoyed reading Arts Ravel and learned some stuff! It's always a pleasant journey for me to follow the links that are posted, and this time I unexpectedly found an "ANSWER" which clarified my own queries about the CALLE exhibition (which I personally loved), and the numerous pieces in the installation.
This is it !!!
For those of you who have seen the installation of the numerous artworks... OULIPO: History: (read later) http://en.wikipedia.org/wiki/Oulipo
WHAT IT IS ? (read this first)
Some examples of Oulipian writing: Queneau's Exercices de Style is the recounting of the same inconsequential episode ninety-nine times, in which a man witnesses a minor altercation on a bus trip, each unique in terms of tone and style.
Plaisirs singuliers by Harry Mathews (the only American member of Oulipo) describes 61 different scenes, each told in a different style (generally poetic, elaborate, or circumlocutory) in which 61 different people (all of different ages, nationalities, and walks of life) masturbate.
Queneau's Cent Mille Milliards de Poèmes is inspired by children's picture books in which each page is cut into horizontal strips which can be turned independently, allowing different pictures (usually of people) to be combined in many ways. Queneau applies this technique to poetry: the book contains 10 sonnets, each on a page. Each page is split into 14 strips, one for each line. The author estimates in the introductory explanation that it would take approximately 200 million years to read all possible combinations.
FAST FORWARD...THIS IS VERY FRENCH...CALLE IS VERY FRENCH...PASSIONATE ROMANTIC DRAMA IS VERY FRENCH...I won't say La V
Posted by ArtChick1 at 8:28 PM No comments:

IT ALL DONE WITH MIRRORS

Vincent van Gogh's fame may owe as much to a legendary act of self-harm, as it does to his self-portraits. But, 119 years after his death, the tortured post-Impressionist's bloody ear is at the centre of a new controversy, after two historians suggested that the painter did not hack off his own lobe but was attacked by his friend, the French artist Paul Gauguin.

According to official versions, the disturbed Dutch painter cut off his ear with a razor after a row with Gauguin in 1888. Bleeding heavily, Van Gogh then walked to a brothel and presented the severed ear to an astonished prostitute called Rachel before going home to sleep in a blood-drenched bed.

But two German art historians, who have spent 10 years reviewing the police investigations, witness accounts and the artists' letters, argue that Gauguin, a fencing ace, most likely sliced off the ear with his sword during a fight, and the two artists agreed to hush up the truth.

In Van Gogh's Ear: Paul Gauguin and the Pact of Silence, published in Germany, Hamburg-based academics Hans Kaufmann and Rita Wildegans argue that the official version of events, based largely on Gauguin's accounts, contain inconsistencies and that both artists hinted that the truth was more complex.

Van Gogh and Gauguin's troubled friendship was legendary. In 1888, Van Gogh persuaded him to come to Arles in the south of France to live with him in the Yellow House he had set up as a "studio of the south". They spent the autumn painting together before things soured. Just before Christmas, they fell out. Van Gogh, seized by an attack of a metabolic disease became aggressive and was apparently crushed when Gauguin said he was leaving for good.

Kaufmann told the Guardian: "Near the brothel, about 300 metres from the Yellow House, there was a final encounter between them: Vincent might have attacked him, Gauguin wanted to defend himself and to get rid of this 'madman'. He drew his weapon, made some movement in the direction of Vincent and by that cut off his left ear." Kaufmann said it was not clear if it was an accident or an aimed hit.

While curators at the Van Gogh museum in Amsterdam stand by the theory of self-mutilation, Kaufmann argues that Van Gogh dropped hints in letters to his brother, Theo, once commenting : "Luckily Gauguin ... is not yet armed with machine guns and other dangerous war weapons."
Posted by ArtChick1 at 8:33 PM 4 comments:

MUSIC TO READ BY

Subscribe to Le Petit Salon by Email
Posted by ArtChick1 at 3:39 PM No comments:

...in the tradition of Belle 'Epoque Parisian Soirees we strive to create an ambience unlike any other artistic setting as a stimulus for friendly dialogue with interesting people... 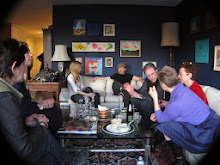 "ART is like grand music, an eternal act of generosity..."

Looking at ART is, and should be, one of life's luxuries...

We invite you to linger... 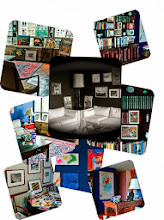